Maria Grant: Who cares what the school board voted to do?

The Clinton Township school board has already been warned by County Prosecutor Kearns that it’s a no-no to vote to do one thing, then do something else.

It’s never clear what the Clinton Township school board means to communicate to the public, and Maria Grant — the chair of the board’s “communications committee” — doesn’t seem to care what the board votes to communicate anyway. (When reporting on her notorious “online surveys” Grant doesn’t even bother to tally up all the data before making conclusions about what “the public” wants.)

The school board writes a letter

Since you don’t attend school board meetings, to understand the problem you need to listen to the official audio recording of the last meeting — July 23, 2012. The board voted to authorize a letter to the editor from the board of education — to explain, long after the fact, why it paid a jackpot 40% salary increase to hire a new business administrator who came from a district 1/5 the size of CTSD. The attorney specifically advises the board that it should vote on the letter.

This is from the last few minutes of the meeting. (The whole meeting is archived on the school district’s own website.)

“This [the letter] will come from the entire board?” asks board president Jim Dincuff.

Dincuff drives the point home. This letter will be from the board, not from any individual:

“I could have sent this out as an individual, Jim Dincuff, member of the Clinton Township board not speaking [sic], Maria Grant could have sent it out as an individual, as a member of the board, but not speaking on behalf of the board. Our feeling was that it was more powerful and more meaningful if there was a motion and it came from the board of education.”

All that discussion — repeatedly making it explicitly clear that this communication will be from the board because no one else is authorized to speak for the board in that letter.

But the letter isn’t from the board

Have a listen to this section of the meeting:

But the letter to the editor is not from the board. It’s from Superintendent Drucilla Clark.

But the board did not authorize a letter from Clark. 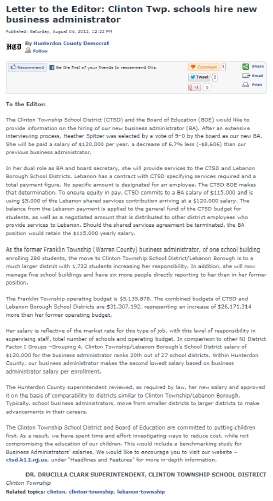 So, who authorized the letter from Dr. Clark that actually appeared in the Hunterdon Democrat? Not the board. The board’s name isn’t on it.

Who’s in charge of what the board actually does?

It’s clear that someone is in control — but it’s not the board. Why is Drucilla Clark issuing a statement in her name? Dincuff makes it clear in the meeting that Maria Grant is in charge of the letter:

Who authorized Grant to put Clark’s name on the letter, and not issue it from the entire board?

This board does not control its own behavior.

(We saw that last year, when a select few on the board decided to keep $247,310 of state aid intended for tax relief, without consulting the entire board!) Whoever is driving this bus keeps driving it into the ditch. They can’t even get a letter out.

Is anyone surprised when taxpayers and parents question how the school board manages $30 million of our taxes and the education of our kids? The driver of this bus is asleep at the wheel, meeting after meeting.

No doubt the letter will be “corrected.” After it was issued and published online. Maybe Dincuff will blame the Democrat.

Here’s how your money is spent — after it’s spent

But the bigger point is addressed by board member Marc Freda in the audio. He points out the board should have discussed all the points that are in the letter — but in a public meeting before the board voted to spend $120,000 to hire a business adminisrator making $85,384.

And he’s right. If they’d discussed the matter publicly and above-board when they should have, then they wouldn’t need to go through this joke of a “discussion” about a letter after the fact. A letter that doesn’t address the main issues anyway. That isn’t even from the school board.

More of The Same: Act now, make up “explanations” later

Last March, the school board approved a new budget that included over $1.5 million of spending increases — while the number of Clinton Towship students had dropped dramatically. Just before the board voted to approve the extra spending, a taxpayer asked Where is the $1.5 million?

Then-board member Mark Kaplan, chair of the finance committee, explained where the extra funds were. The money had already been spent.

Even when the leadership of this district tries to clean up its own mess, they slip and fall in it.

On June 11, 2012, the school board paid a salary raise to hire a single administrator that’s almost as much as it spends to hire a starting teacher. A 40% increase — $34,616. The board didn’t discuss a word of its decision in public. It was all done in “executive session.” They voted quickly with no deliberation.

Now the board issues a letter — almost two months after the fact — to “explain.” Except the letter and the explanation isn’t from the school board.

Line up the letters — and the apologies

Board president Jim Dincuff still needs to issue a public apology to board members Marc Freda and Michelle Sullivan after falsely accusing them of “ethics violations” to punish their NO votes on the indefensible school budget. Good luck. Dincuff hasn’t got the guts or the integrity. And he has already publicly admitted he has no evidence.

The board voted to issue a letter to the editor from the board. Grant sent it out from an individual.

The next letter needs to be a public apology from communications committee chair Maria Grant — to the rest of the board and to the community, for once again playing games with “communications” from the board. Grant should issue it before she starts issuing her campaign literature next time she runs for re-election.