Ducking Integrity, Abusing Power: All on advice of the school board attorney

In just a few months’ time, board president Jim Dincuff demonstrated that he can:

And now, Dincuff has demonstrated that he can interfere with a citizen’s right to communicate with a state agency by sending a resolution to the NJ DOE suggesting that the editor of this blog has misrepresented himself as an elected board member — without a shred of evidence.

The action to send the resolution to the DOE was based on Dincuff’s and six other board members’ “analysis” of what an e-mail might mean, without consulting the author.

Dincuff has demonstrated that he’s got six other board members following him around like a mother duck — even when he’s going over the edge: Mark Kaplan, Michelle Cresti, Kevin Sturges, Maria Grant, Rachel McLaughlin, and Kevin Maloy. All voted to notify the DOE that unelected citizens do not represent the board of education.

Dincuff stated that the action was taken on the recommendation of the school board attorney, Vito Gagliardi.

At the end of March, Dincuff launched an attack against two of his own board members — last night revealed to be Marc Freda and Michelle Sullivan. Dincuff prefaced his statement by noting that he was making it on advice of the board’s attorney, Vito Gagliardi. Dincuff stated that Gagliardi advised Dincuff that he had the power to demand the resignations of Freda of Sullivan. Dincuff further accused the two board members of violating confidentiality and the state ethics law.

According to the Hunterdon Review,

“When prompted by both Freda and Sullivan as to whether he had any plans to file formal complaints against them, the board president said, ‘I think in order to file an official complaint, one needs to have irrefutable evidence” that confidentiality was breached. ‘At this point I don’t think I see that.’“ 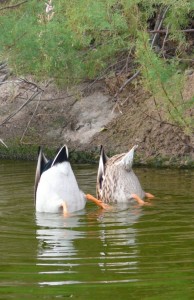 Dincuff has no evidence to support any of the nasty, bizarre accusations he has made over the last six months — accusations against citizens and his own board members. His attorney, Vito Gagliardi, supports Dincuff’s actions but never appears at meetings. The two duck and cover when confronted with facts.

Meanwhile, taxpayers pay Gagliardi every time Dincuff huddles with him behind closed doors for “legal advice.”

Dincuff’s abuses of power continue: personal attacks, intimidation, unfounded accusations, biased official actions against people he doesn’t agree with, and the diversion of millions of dollars’ worth of tax relief into a school system that is insupportable.

In the end, all that Dincuff and Gagliardi show for the money they waste and the public embarrassment they generate — are their backsides. Supporting them are six board members who do what they are told.

Meanwhile, spending per student is up over 14%. The Clinton Township student population is down dramatically. And the board spent almost $3 million that it should have used to lower the school tax levy. Our classrooms are becoming filled with students from out of town who don’t pay full fare, leaving Clinton Township taxpayers to subsidize expensive new buildings and a bloated staff.

But the front page doesn’t feature those stories. The news is that the NJ Department of Education has been notified that citizens like you don’t represent the school board.

This entry was posted in Schools, State, Taxes. Bookmark the permalink.