The E-mail: Dincuff’s sad attempt at intimidation and harrassment

“No elected member shall be prohibited from making an inquiry for information on behalf of a constituent…” (see below.) 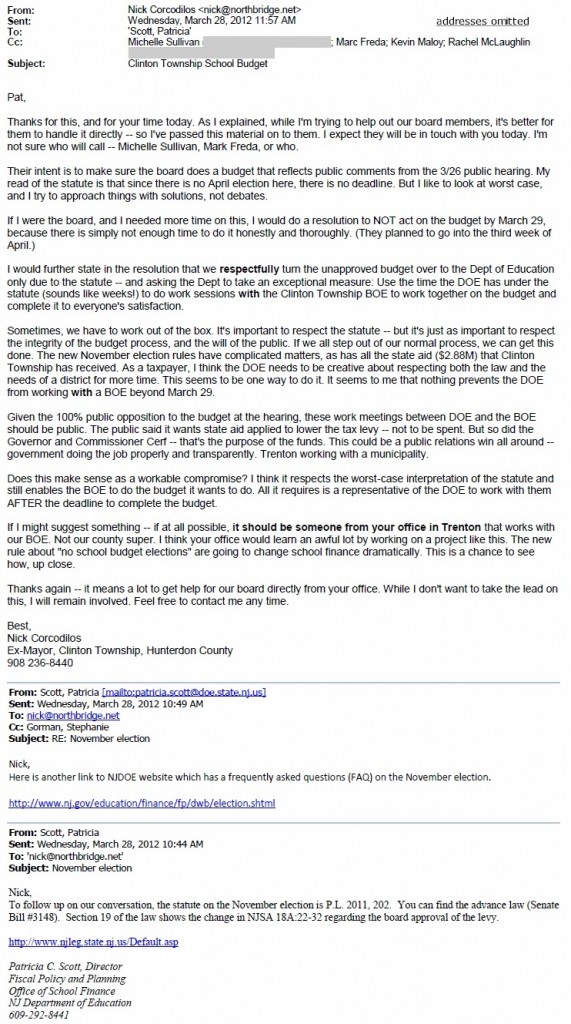 Misrepresentations to cover up a breakdown in management

Dincuff claimed the e-mail required a resolution notifying the DOE that the editor of this blog “does not represent the Clinton Township Board of Education or any of its members or any administrators in any capacity whatsoever.”

However, what the e-mail describes is the total breakdown of Dincuff’s administration — none of them knew when their budget was due, and they failed to take public input about cutting taxes into account. As a citizen and taxpayer, the editor was seeking guidance from the DOE because Dincuff mismanaged the budget process ignorantly. Apparently, two board members were seeking the same thing.

In a public statement he made at the March 29, 2012 school board meeting, Dincuff misrepresented statements made by the editor of this blog in the above e-mail. Said Dincuff:

However, the e-mail above says nothing about contacting the Department of Education “on behalf of” anyone — nor did the editor claim any official role during discussions with DOE. (In fact, I specifically stated to the DOE that I am not an elected official, not on the board of education, and that I was calling as a citizen.) Dincuff’s claims are a total fabrication. More here: Former mayor responds to Clinton Township school board resolution that singles him out by name.

Threats and retaliation for “No”

In the same statement, Dincuff threatened board members:

“I do not know what the intentions of these two board members are. However, I have been in contact with our board attorney and he advised me to make this statement in public.

“He has also advised me that I am on behalf of the board within my rights to ask these members for their resignations.”

“…they may have also gone so far as to attempt to act independently of the board in collusion with an unelected member of the community by contacting the state Department of Education to request assistance in completing out local budget.”

There is no obligation on the part of board members to obtain the permission of the board president — or anyone else — when they want to talk to the DOE or to constituents. Elected officials talking or working with constituents is what democracy is all about.

However, it appears Dincuff has violated the New Jersey School Ethics Act, which protects the right of board members to make inquiries on behalf of their constituents. The law says:

18A:12-24
i. No elected member shall be prohibited from making an inquiry for information on behalf of a constituent, if no fee, reward or other thing of value is promised to, given to or accepted by the member or a member of his immediate family, whether directly or indirectly, in return therefor;

The reason this editor contacted the NJ DOE and board members was because board president Dincuff, board administrator Anthony Del Sordi, superintendent Kevin Carroll, finance committee chairman Mark Kaplan, and county superintendent Jeff Scott made it clear in March that they did not know what the deadline was for submission of the school district’s budget to the state. Their failures of expertise and leadership thus put the school district and taxpayers in jeopardy. Dincuff led the board to delay submission of its budget until mid-April because he didn’t know any better — he had not done his homework, nor had his administration team.

The DOE informed Dincuff that the budget was due at the end of March.

Do state officials know whom they’re talking to?

The editor of this blog now has the distinction of being held out to the New Jersey Department of Education as a citizen who does not represent or speak for the Clinton Township board of education. As if the NJ DOE doesn’t know whom it is talking to.