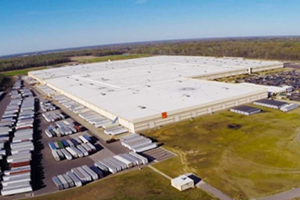 Exxon Mobil Corporation has notified Mayor Brian Mullay that it plans to sell off hundreds of its 800 acres on Route 22 & 31. Sources familiar with the matter said  that a 4 million square-foot warehouse is reportedly planned for for an unknown tenant.

4 million square feet of warehouse would qualify the project as one of the top 10 largest facilities of its kind in North America.

Will mayor and council “refer” it to the planning board?

Exxon will need approvals from the township’s planning board and possibly the zoning board. But first, the council will likely need to vote to refer any application to the board.

UPDATE: Exxon Warehouse: Clinton Township zoning says NO
This is a common way for mayors and council members to “bless” a project while also “washing their hands of it” — and thus leave the planning board to “hold the bag.” What residents are likely to hear from their elected officials is:

(This is how Mayor John Higgins and his council — some of whom are still in office — ran and hid after approving over 800 affordable housing units in the dark of night in 2017.)

The fact is, the mayor and council have enormous influence over whether a “big box” like this even gets to the loading dock.

For months Exxon reportedly has been having confidential back-room meetings with Mullay, former mayor John Higgins (a retired Merck land development executive with ties to Exxon), township planners and other officials. If Exxon brings formal plans to the Planning Board, board members that have been involved — including Mullay and Higgins — may have to recuse themselves from the review and approval process.

The plan reportedly includes a new traffic lane on Route 31 to accommodate thousands of truck trips per day, connecting not to I-78 but to Route 22, further exacerbating congestion on local highways. The Route 31 access road to the site is near the township’s #1 highway deathtrap, the intersection of Route 31 and Country Club Drive.

For the benefit of getting toilet paper, books and other necessities from Amazon in mere hours, residents will have to deal with the estimated thousands of trucks that will be spewing out of the site each day into the most congested intersection in Hunterdon County: the Route 22/31/78 “mixing bowl” at the Petticoat Road intersection.

As a reference point, an Amazon warehouse of just 680,000 square feet in Fontana, CA, generates nearly 6,000 vehicle trips per day, including more than 2,300 diesel truck trips. Such massive warehouses are known to create equally massive amounts of air, water and noise pollution in addition to highway congestion.

11 warehouses each the size of 18 football fields have been built in 2020 alone along Pennsylvania’s I-78/I-81 corridor.

In N.J., angry residents of West Windsor have organized to fight a 5.5 million square foot warehouse. In Salem and Cumberland Counties residents are opposing similar invasive projects. The battle has been engaged in White Township, Warren County for several years against two Jaindl warehouses proposed at 2.6 million square feet.

Clinton Township officials are already familiar with local activism against powerful state agencies and big developers alike. Over 3,500 residents organized to fight and stop the 1,100 housing-unit Windy Acres development. Over 2,500 have petitioned to force the New Jersey Water Supply Authority to re0pen County Route 629. The question is, will mayor and council go along with this Exxon deal and face the wrath of their constituents again?

Why is Exxon doing this to Clinton Township?

Exxon is telling its employees not to worry about their jobs. Jobs will not be affected. The purpose of the project is to raise money for the company:

“This is simply an opportunity to realize the value of our global property portfolio and capture additional operating efficiencies.”

“has engaged with parties interested in potentially purchasing and developing the surplus land. We anticipate approaching the Clinton Township Council regarding the potential development at a future Council meeting.”

Exxon is holding a meeting for its employees about the matter on November 7. The next township council meeting is Wednesday, October 27. The mayor and council have made no announcements to township residents. Rather, they reportedly have taken measures to keep this information from the public to date.

Exxon has been cultivating support

Exxon is apparently sweetening the deal by offering to donate 120 acres of its 800 to the township for open space and recreation, and to help rebuild township hiking trails. If the donation includes areas that lie over massive limestone deposits, known as karst, on the Exxon property, the land is probably undevelopable anyway. Karst is known for collapsible underground caves that leave massive sinkholes behind.

In 2019 township councilwoman Amy Switlyk announced that Exxon awarded a $45,500 “grant” to the Environmental Commission to support “environmental education.” As council liaison to the EC, Switlyk has made herself responsible for all things environmental. How susceptible is she to Exxon’s offers in a quid pro quo? Since she is running for re-election, along with councilman Bill Glaser, it will be interesting to see how the two vote about referring the big-box warehouse plan to the planning board, knowing the water, air and noise pollution such a project will bring.

In fact, it will be interesting to see how candid the entire council is about the matter, and whether they once again play their game of “We have no control when special interests and big money attack Clinton Township! It’s up to the planning board now! Land-use law ties our hands! Let’s just make the best of it!”

Then there’s this classic, if overused and disingenuous political foil: “A warehouse will generate lots of tax revenue for us!” Remember where you read that while you research towns that have used such deal-with-the-devil windfalls to actually decrease taxes.

Do Clinton Township’s elected officials have what it takes to do the right thing — for the residents? Or do they have to be publicly shamed into it once again?

It probably depends on how many residents show up at upcoming council meetings.