[An earlier version of this article suggested the proposal to permanently close 629 is “dead in the water.” The title has been edited to reflect that it’s merely “on hold.” -Ed.]

On August 4, 2022 U.S. Congressman Tom Malinowski (D) met with officials of the New Jersey Water Supply Authority on behalf of constituents to raise questions about the proposed permanent closure of Hunterdon County Route 629.

Malinowski was recently asked for help by area residents that oppose the proposed permanent closure of the road that goes over a Round Valley Reservoir dam.

This morning a Malinowski spokesperson acknowledged the congressman’s meeting last Thursday with the NWSA. 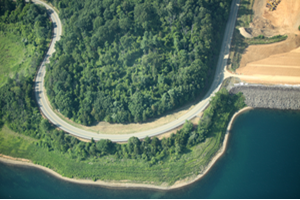 Today MyCentralJersey.com reported that the NJWSA’s plan to permanently close 629 has been “put on hold,” following a recommendation of the Authority’s Capital Projects Committee.

The Hunterdon Review has also reported on the hold.

MyCentralJersey reported the road closure will be on pause “until an updated study is completed on possible security concerns.”

There is no indication whether or when 629 will be re-opened, although work related to the road appears near complete. (See photo, courtesy of Robert Quinlan.) But the “informal proposal” — on which the NJWSA based its requests for formal resolutions of support by Clinton Township and Lebanon Borough — seems to be on hold, at least for now, apparently due to the Malinowski meeting.

Proposal to close 629 appears dead in the water, for now

The MyCentralJersey.com article goes on to say the proposed road closure was “prompted by a confidential study by the Department of Homeland Security and the Army Corps of Engineers.”

However, “the authority’s Capital Projects Committee has recommended an update to that study. The authority has begun discussions with the state Department of Environmental Protection, the New Jersey State Police and Homeland Security about updating the study. Until that study is completed, the authority will hold off asking the Hunterdon County commissioners to close the road.”

Coming just days after the U.S. Congressman met with WSA officials about the matter, it seems concerned residents have an advocate in Tom Malinowski.

Internal NJWSA e-mails obtained by ExMayor.com, dated June and July, reveal a flurry of attempts by Water Authority officials to come up with last-minute justifications to close 629 — after unyielding protests from area residents.

Water Authority e-mails to and from U.S. Homeland Security and the U.S. Army Corps of Engineers appear, from these documents, to have been fruitless and embarrassing.