ExMayor.com has obtained official records from the New Jersey Water Supply Authority  under the NJ Sunshine Law that reveal the Authority scrambling to find after-the-fact justification to support its proposal to close county route 629.

Records were requested from the beginning of 2022 — but it took the Authority until July to seek support, well after it floated the road closure.

One e-mail, for example, asks Department of Homeland Security whether it knows “of any document that says roads should not be placed on high hazard dams in particular ones that are on the critical dam list?”

This request came weeks after the NJWSA asked Clinton Township and Lebanon Borough for formal resolutions of support to close the roadway.

E-mails to and from U.S. Homeland Security and the U.S. Army Corps of Engineers appear, from these documents, to have been fruitless and embarrassing.

Click “View doc” link after each summary to view the source document. 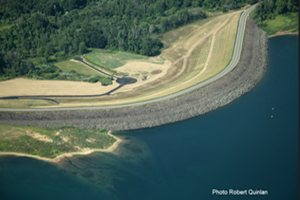 Shaffer (WSA) and Kale (DEP) debate whether internal docs “call out this road as a target” and speculate about whether “Justification for closing road could be tied to the “active and passive vehicle barrier guide””. These efforts to create justification for closing 629 are made weeks after WSA asks Clinton Township to support the proposal.

In the meantime, Mayor Brian Mullay keeps repeating that NJWSA instructed him to keep the justification for the closing “secret,” but that he finds “the reasons compelling.” This leads his council to vote unanimously on June 22 to go along. View doc

July  8
WSA asks NJ DEP to support permanent closing of 629, “based on recommendations identified in a report prepared by US Department of Homeland Security and US Army Corp of Engineers in coordination with NJDEP Bureau of Dam Safety. The report analyzed various potential threats at all three Round Valley dams and offered recommendations to mitigate those threats.”

The referenced report was produced in 2012, 10 years before WSA asked towns for resolutions of support. Today’s announcement suggests report is out of date and insufficient. View doc

July 22
WSA e-mail response to earlier DHS e-mail: “the Water Supply Authority finds ourselves in a bit of a local uproar.”

WSA has “requested input from NJSP [NJ State Police] about whether “the report provides a legitimate basis for our request.”

These requests to justify closure of 629 come over a month after WSA told Clinton Township and Lebanon Borough that the action was necessary. View doc