Clinton Township: Who’s worth voting for?

Who’s worth voting for in Clinton Township for town council, the local school board and the high school board? How about political candidates who show they respect and follow the law before they get elected?

“The essence of Democracy is an informed electorate.”
– About ELEC

Among 13 political candidates on the November 6, 2018 General Election Ballot, 6 seem to already be in violation of New Jersey Election Law.

Before we give them a chance to show they will “uphold the law” as elected representatives — public databases suggest they’ve already shown they can’t be bothered to follow the law.

Scroll down for the list of apparent election law violators. 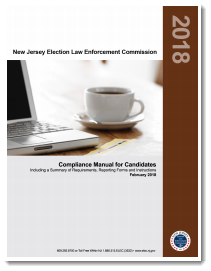 The New Jersey Election Law Enforcement Commission (ELEC) monitors the campaign financing of all elections in the State. Its purpose is to ensure transparency in elections by giving the public a look at every political candidate’s finances — during campaigns well before election day.

How else are voters supposed to decide who’s worth voting for?

ELEC also publishes a Compliance Manual for Candidates that explains the law, details requirements of all candidates, provides examples, and includes all forms that must be filed before, during and after political campaigns and elections.

It’s all public and online

Anyone can monitor any political candidate’s filings and reports day-to-day in ELEC’s public database.

Well, it’s supposed to be in there if the candidate is following the law.

Anyone can also see which candidates that are on the November 6 ballot have not filed the legally required reports.

All candidates must file fund-raising and spending reports

If a candidate buys campaign signs or advertisements, or mails out campaign literature, using donations or their own money, they must file disclosures prior to the election.

ELEC sets dates when required financial disclosure reports must be filed and made public.

ELEC requires political candidates to publicly disclose what monies they raised and spent — including their own money.

Which Clinton Township candidates seem to be in violation of New Jersey’s Election Laws?

If a candidate’s campaign buys signs or advertisements, or mails out campaign literature, using donations or their own money, they must file disclosures prior to the election.

Of 13 political candidates on the Clinton Township ballot, 6 have failed to file required ELEC documents and reports, according to ELEC’s public databases.

Listed in order of appearance on the 2018 Clinton Township General Election Ballot: 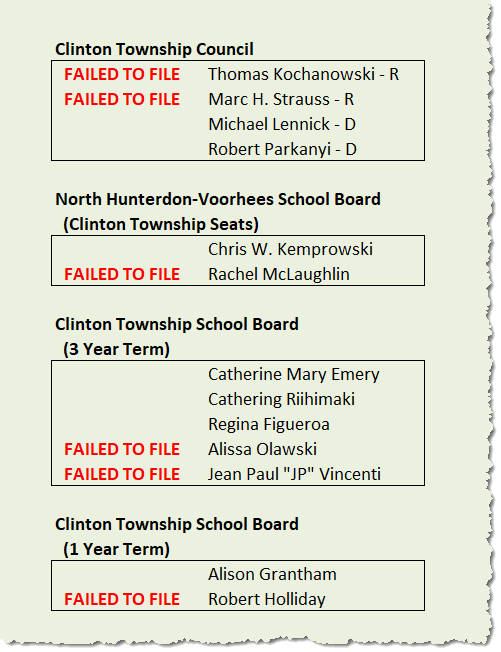 How can any of these political candidates seriously expect voters to believe they will “uphold the law” once they are elected — if they apparently haven’t bothered to comply with New Jersey’s Election Laws before the election?

NOTE: North Hunterdon-Voorhees School Board candidate Chris W. Kemprowski appears not to have raised or spent any funds on campaign signs or other campaign materials and thus appears to be exempt from disclosure requirements.

We can hear the excuses now:

This is where trouble in our government starts. This is why taxpayers complain their elected officials are doing a lousy job.

Who should know better?

Perhaps the worst scofflaws are the political candidates who are already in office. They should know better:

If these people don’t bother to follow Election Law, what does that tell their constituents about whether they’re bothering to follow the law in their elected positions?

ELEC also requires all candidates to label campaign signs, mailing pieces and other “political communications” with a statement that identifies the candidate.

At least one candidate, Jean Paul “JP” Vincenti — for Clinton Township Board of Education — is in violation of this requirement. Vincenti’s half-page ad in the Clinton Township Newsletter (November 2018) does not include the required “paid for by” label identifying the source.

Clean up government — expect candidates to follow the law

Who deserves your vote on November 6 in Clinton Township? How about political candidates who show they follow the law before they get elected?

It’s shocking that almost half the candidates running for office in Clinton Township have not filed required ELEC disclosures.

How can citizens expect our State and Federal government to be clean, when they vote for local officials who ignore the law even before they get elected?

To view each candidate’s actual ELEC records as of Nov. 1, see Clinton Township: Are 6 of 13 candidates violating election law?

This entry was posted in Election and tagged ELEC, election. Bookmark the permalink.