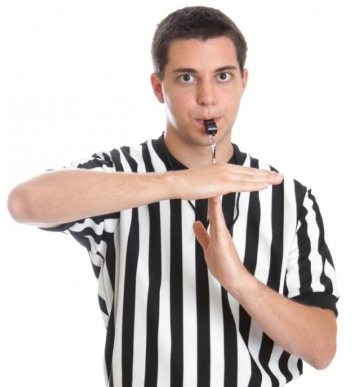 They also complained that school board president Francis Goger intentionally misled the public about decisions made in secret about a popular coach’s employment — in possible violation of the New Jersey Open Public Meetings Act, which requires public governing bodies to make all decisions and to take all actions in public.

Asbury resident Peggy Furman read from two e-mails dated February 5 and February 16, 2018 that she said are in the public record, and that were written by board member Lisa Approvato to Superintendent Jeffrey Bender.

Furman said the e-mails reveal violations of the New Jersey School Ethics Act, N.J.S.A. 18A:12-24, because Approvato interfered with the Superintendent’s official duties relating to recruiting and hiring.

Furman suggested that Approvato improperly used her position on the board to influence Bender’s decision about whether to recommend that a cheerleading coach’s employment should be renewed. Approvato’s daughter is reportedly on the cheerleading squad.

Furman then read from case law and explained what constitutes evidence of ethics violations:

“I discussed all of this with you at the last board of education meeting and it fell on deaf ears,” said Furman to the board. No board member responded to the issues or questions Furman raised.

Clinton Township resident and parent Chris Rush said during the public comment period at the school board meeting:

“I’ve been sleeping. After the last board of ed meeting my eyes were opened, and I can promise you that I will not be sleeping for the rest of the duration of my children going to this district.”

Rush then read copies of two e-mails she said were written by NHV school board president Francis Goger. In the first e-mail, dated April 22, 2018, Goger wrote to another parent about a controversy surrounding the board’s forthcoming decision about whether to renew the employment contract of the high school’s cheerleading coach. Goger promised to take parents’ input into account.

But the board president broke that promise before he’d even made it, said Rush.

3 days earlier, Goger told board members the decision was already made

Rush then read from another e-mail she said was written by Goger on April 19, “three days prior to [the other] e-mail, and prior to the 4-24 board of ed meeting… from Mr. Goger to the board of ed.”

In that e-mail, Goger notified the rest of the board that, contrary to the commitment he had made to concerned parents, “The decision has been made and whatever the coach’s supporters have to say is not going to change anything.” 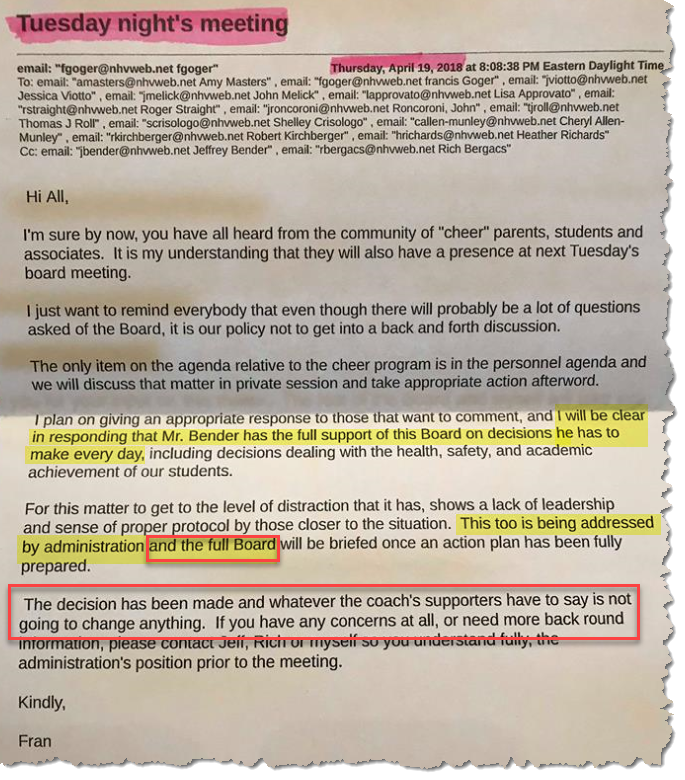 The full, official audio recording of the board of education meeting from which the above excerpts are taken is available on the NHV website.

Goger tells the board that he will inform the public that “Mr. Bender has the full support of the board for decisions he has to make every day” without allowing individual board members to decide for themselves — after they hear from the public at a forthcoming meeting — whether or not they actually support the specific decision at hand by the Superintendent.

This would not be the first time the NH-V board had a problem with the Sunshine Law. See NHVSD Board President Beverly Thorne: (Oops! I did it again!) Ignores NJ Open Public Meetings Act.

It is worth noting that the same attorneys continue to represent and advise both boards — Brenda Liss at NH-V and Vito Gagliardi at CTSD.

It appears Goger may have used his position to influence or intimidate other board members into silence.

Further, Goger tells the board that the matter “is being addressed by administration and by the full board” — even though the board has not yet met. Yet he goes on to state that “the decision has been made.”

Goger effectively tells the board members that they may not consider the public’s comments or input.

Perhaps more important, Goger suggests the full board made a decision on the employment of the cheerleading coach — days before the full board met in public. That would be a violation of the New Jersey Open Public Meetings Act, or Sunshine Law.

Finally, BOE president Goger’s April 19, 2018 e-mail is to the entire school board. It appears to be an official deliberation with a quorum of the board, in which Goger attempts to influence the board’s behavior, and which may constitute an illegal meeting of a governing body without the public present. Goger deliberates about decisions of the board that the board has not yet made officially and in public.

Until just a few years ago, the NH-V school board did not publish audio recordings of its public meetings. Were it not for these recordings, the public would still be in the dark. See North-Voorhees School Board: Why don’t you record public meetings?

Get ExMayor.com updates by e-mail!

This entry was posted in Schools and tagged Approvato, cheerleader, Goger, NHVSD, North Hunterdon, School Board. Bookmark the permalink.