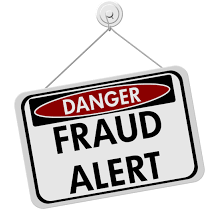 Clinton Township’s affordable housing settlement with the Fair Share Housing Center hinges on all the seven projects within it delivering the number of housing units Mayor John Higgins and the council have agreed to. If any one of the sites fails, Clinton Township will face massive penalties and contingencies defined in the plan:

(Interestingly, other towns that are in similar negotiations with FSHC have not agreed to the onerous 10+ units per acre zoning penalty. Only Clinton Township.)

There’s always been a fraud in Clinton Township’s affordable housing plans, since Pulte Homes tried to build 1,165 housing units on Windy Acres — then fewer, then fewer still, because Pulte could not come up with the sewer capacity.

No one has ever been able to sewer the Windy Acres site — the old, bigger version, or the new, smaller version. Without sewer service, Windy Acres does not qualify to be in an affordable housing plan. And everyone knows this because it’s all over the public record.

Pulte tried and gave up

Pulte Homes, one of the biggest developers in the U.S., lost its shirt because it could not sewer Windy Acres.

Desperate, Pulte sued Clinton Township. After Mayor Tom Borkowski and his lawyers tried to settle with Pulte — to avoid hundreds of millions of dollars in damages, said Borkowski again and again — Clinton Township finally hired a powerhouse commercial litigator that brought Pulte to its knees.

After over a decade of trying to sewer Windy Acres, Pulte gave up. Amidst reports that Pulte put between $25M-$30M into Windy Acres, it finally sold the land to Clinton Township for $7 million.

Every affordable housing plan involving Windy Acres — including the one put forth by councilmen Jim Imbriaco, Peter Marra and Spencer Peck in 2010 — failed because no one could procure sewer capacity for the site.

News articles memorialized the fatal problems with sewers for even the smaller version of Windy Acres, which has nonetheless been put back into Clinton Township’s plans today. See “Affordable housing plan opposed by Clinton Township citizen’s group.”

“… litigation… ultimately resulted in the abandonment of a prior plan by Pulte Homes in 2004 to build affordable housing on the Windy Acres site because it ‘did not provide a realistic opportunity to deliver affordable housing.’ There was no access to water or sewer. This hasn’t changed, but the township owns the property.” – The Hunterdon Review, Nov. 4, 2010

The reasons why Windy Acres cannot be included in an affordable housing plan are simple, and they have been written into the public record for many years.

When 25 acres of the original Windy Acres property were subdivided for potential affordable housing, it was with the sober vision that at some far-distant time, sewer capacity might be had, and at a reasonable cost. But nowhere in the foreseeable future.

Until Mayor John  Higgins came along and tried the scam all over again.

Why is Windy Acres a scam?

There are two well-documented reasons why Windy Acres cannot realistically be sewered.

Building a new sewer system on the site is prohibitively expensive.

Why? Because of the Category-1 stream on the original 292-acre Windy Acres. The stream is still there. Effluent from a sewer plant into Category-1 waters may not degrade the quality of the water. A C-1 waterway is so pristeen that trout breed and grow in it. Effluent from a plant would have to be of equal or higher quality than the stream water itself. If the technology exists to accomplish this, Pulte found it prohibitively expensive, and it remains so. Township professionals have testified that, statistically, any such plant would be likely to trigger DEP violations because no one can guarantee its effluent will not contaminate the stream.

Sewer service from the RLSA does not exist.

According to the RLSA, there has not been capacity available in its system for Windy Acres. Just as important, Windy Acres is not in the RLSA sewer service area (SSA). Pulte attempted to sue RLSA capacity holders several years ago in Superior Court. Lawyers from 12 capacity owners showed up — some from major corporations — and the judges all but laughed Pulte out of court. The court ruled that Pulte could not take an asset from its owners. Thus, a connection to the RLSA has not been a viable legal option. But that doesn’t prevent anyone from suing the RLSA again — a contingency included in the settlement agreement signed by Clinton Township.

Every plan has been a fraud

Regardless, several iterations of politicians — with the support of township attorneys — have tried to put Windy Acres in the township’s affordable housing plan in a game of Russian roulette. Every plan has pretended Windy Acres could be sewered within the time constraints required. Every plan was revealed to be a fraud.

This public testimony, presented in March 2015 when Mayor Higgins added Windy Acres into the last iteration of Clinton Township’s affordable housing plan, reveals the history of sewer failure for Windy Acres. It also showed once again, in 2015, why Higgins’ inclusion of Windy Acres was yet another scam.

Windy Acres is now included in the Fair Share Housing Center settlement agreement, and is to include 89 municipally-built affordable housing units.

Mayor Higgins heard the testimony above in 2015. Nonetheless, he included Windy Acres in the plan. He testified that he seemed to have special information that Readington would not reject a request for sewer capacity for Windy Acres.

“We have had past conversations with officials in Readington who indicated that their ordinance does provide a, um, priority for affordable housing projects within their township, and they might, they may see it the same way for an affordable housing project adjacent to the township. Lots of work to be done but, um, it is not a foregone conclusion at this point in time that that sewerage would not be forthcoming.”

Clearly, Mayor Higgins had not had any conversations with Readington or the RLSA about getting sewer capacity. Readington officials had already provided a statement to the Clinton Township Community Coalition stating that “Readington’s sewer capacity is all allocated and therefore there is none available at this time.” Higgins didn’t know that because he had not, in fact, bothered to speak to Readington about it — even as he advanced his theory. 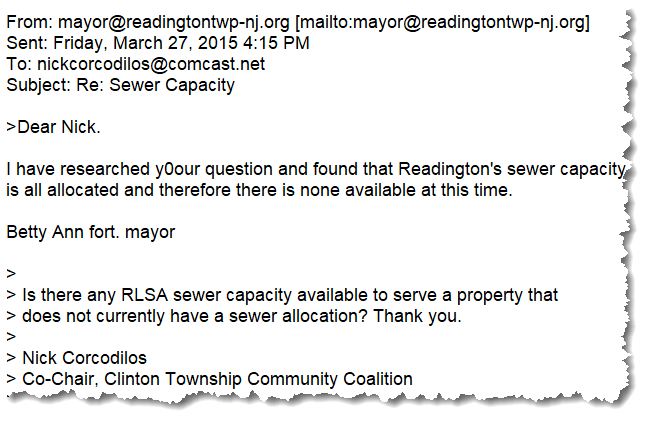 Almost three years later, at the time of this publication, Readington’s position is that it has no available capacity for Clinton Township.

What happened between 2015 and today? Nothing.

In spite of information and testimony provided in March 2015, Clinton Township included the fraudulent Windy Acres in its affordable housing plan — yet again.

Today, Higgins has signed a deal binding the town to build 89 affordable housing units on Windy Acres, and to provide sewer for them.

Since 2015, Mayor Higgins and his administration have done absolutely nothing to develop on-site sewer capacity for Windy Acres, or to do the “lots of work” he promised to obtain sewer capacity from Readington.

“…it is not a foregone conclusion at this point in time that that sewerage would not be forthcoming [from Readington].”

What happens when the fraud is exposed?

The agreement Higgins signed spells out what he has also agreed to if he still can’t get sewers to build Windy Acres: 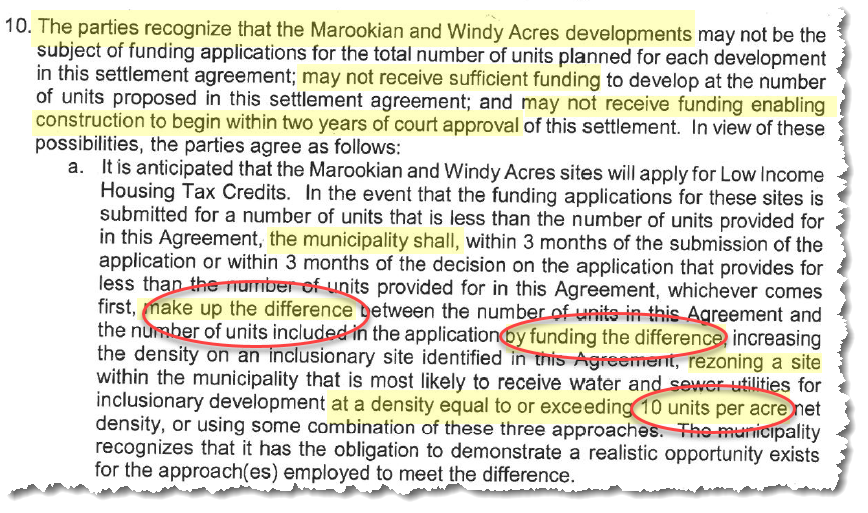 And, “if needed,” Higgins has agreed to sue to obtain sewer and water capacity:

The Clinton Township lawyer who included this clause cleverly defined later in the agreement exactly where that sewer capacity is, and who’s going to get sued: Readington, Lebanon, and the RLSA:

Could this have been avoided?

Maybe. If Mayor John Higgins and the Council had handled the settlement deal transparently and disclosed it to the public in advance, and invited the public to review, comment on and provide input it — before Higgins signed this fatally flawed deal.

Maybe some smart residents would have seen these problems and alerted the mayor to them.

The mayor invites you to a public hearing at NHHS about the settlement!

“We want the public to come out and see it and partciaipte,” said Borkowski in a May 5, 2005 Hunterdon Democrat article. “We’re hoping for a big turnout.”

Not this mayor. Not John Higgins. Not council members Brian Mullay, Amy Switlyk, Dan McTiernan and Tom Kochanowski. According to an official involved with the FSHC settlement who is not authorized to speak about the matter publicly, a township attorney advised officials not to present the settlement deal to the public before voting on it.

The public isn’t qualified to partcipate

But Mayor Higgins doesn’t think much of the public’s qualifications to help with government. Here’s what he said at a recent Hunterdon County Freeholder meeting about another land-use matter that would have benefited from public input:

“I don’t know very many people in the township that have enough knowledge of … our land use ordinances to provide any real meaningful criticism or meaningful suggestions on how to improve them.” – Mayor John Higgins, Sept. 5, 2017, Freeholder Meeting

(More about that freeholder meeting was reported by TAPInto Flemington-Raritan.)

Without meaningful input from the public, the fatal Windy Acres affordable housing fraud has been allowed to make its way into a contract that binds residents as well as future mayors and councils.

The litigation will begin when Clinton Township cannot fulfill the terms of the FSHC settlement agreement because Windy Acres cannot be sewered on time, as promised.