The problem with Tom Borkowski running for Hunterdon County Freeholder with Will Mennen is Borkowski’s public record. 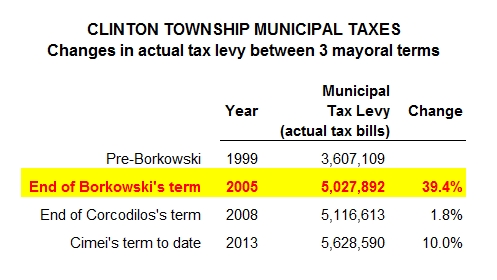 During 6 years as mayor of Clinton Township, Tom Borkowski raised the municipal tax levy 39.4%. (Did Mennen do his due diligence?)

In 2004 alone, Borkowski raised tax bills 11.7%, the biggest soaking of Clinton Township taxpayers in 15 years. But his campaign flyers claim he’s a “champion of the taxpayer.”

Take a look at the tax levy increases in other mayoral terms after Borkowski’s (above right). Why did Borkowski stick it to taxpayers so hard for 6 years?

Between 2000-2005, Mayor Borkowski issued a staggering 21 bond ordinances totalling almost $16 million without once asking voters for their approval.

Yet freedholder candidate Will Mennen claims running-mate Borkowski is a “fiscal conservative.” (Not even close, Will!) In 2006, right after Borkowski left office, millions in unspent bond funds turned up in Borkowski’s budget — money that belonged in unsuspecting taxpayers’ pockets.

But wait a minute… in 2009 Borkowski sought to fill a vacant seat on the Freeholder board.

He said he opposed bonded debt without approval of voters, and claimed that he endorsed NJ bill A-1880, which would require voter approval of bonded debt.

So why did he do 21 bond ordinances without voter approval while he was mayor?

Good question. Borkowski has never answered it. But his supporters tried to get him onto the Freeholder board stating that:

“Tom will fight hard to put an end to the increased bonding indebtedness.”

This was part of a vicious mailer that accused one of his opponents of behaving “unethically.” That mailer so shocked Republican Committee members that Borkowski lost the vote for the Freeholder seat.

Borkowski claimed he had nothing to do with the mailer. His supporters denied they put out the mailer. It’s not clear what’s worse: Borkowski’s hypocrisy or the people Borkowski associates with: his political “friends.” Perhaps they’re waiting for patronage jobs.

Borkowski’s got a public record on that, too. One he’d probably prefer not to see online. But public contracts are public documents. Let’s take a look at Tom Borkowski’s idea of how to take care of his friends while making taxpayers pay for it.

Borkowski has attacked the exorbitant contract the Freeholders gave their attorney, Guy DeSapio. Borkowski briefly served on a “Legal Services Advisory Board” and says in his campaign flyers that he “saved county taxpayers over $700,000 annually in legal fees” by helping get rid of DeSapio. But Borkowski knows all about unconscionable employment contracts that waste taxpayer money. He’s written and signed them.

In 2004 Borkowski hired Ulrich “Al” Steinberg as township CFO and gave him a one-sided, ironclad 3-year contract. (You’d love this contract yourself, if your boss were goofy enough to give it to you!) Steinberg got full pay and benefits to work 2.5 days per week, from home if he wished:

…so that Steinberg could go to his other job… in Marlboro!

The contract Borkowski signed paid for any “meetings, conferences and seminars” Steinberg wanted to attend, “but not limited to meals, travel and lodging” — even if they had nothing to do with Clinton Township business.

But only the CFO could cancel the contract. Borkowski made sure Clinton Township was stuck holding the bag — there was no way the next mayor and council could cancel it:

Borkowski, a lawyer, ensured there was no way out of this sweetheart deal: If the Township cancelled, it would be “liable for compensating the Employee” for the entire 38 months. That’s the deal Borkowski gave his CFO to handle tax and bond money. For Borkowski, political supporters come first. And taxpayers pay.

Is Al Steinberg is helping Borkowski with his current campaign?

But the public record shows that for 6 years Borkowski led the charge to build Windy Acres and fought anyone who tried to get in Pulte’s way. (He even offered Pulte an outrageous $25 million of public funds for the land. Later, the Township bought it for $7 million, half what Pulte paid for it.)

Rushing to approve a deal to build Windy Acres, Borkowski cut short the public hearings after “too many” citizens showed up to speak. (The Hunterdon Democrat and the Hunterdon Review blasted him for it.) When state senator Leonard Lance and — ironically — the freeholders submitted letters asking for extended public hearings, Borkowski told them to butt out.

Next, the Commissioner of the New Jersey DEP tried to help stop Windy Acres. Borkowski responded with an unbelievable nastygram demanding that the Commissioner withdraw his complaints. Then Borkowski voted to sell Clinton Township out to Pulte Homes in a “settlement” deal so bad that the State of New Jersey made good on the DEP Commissioner’s warnings and rejected it.

For six years Borkowski, his lawyers, and his planning board sat on their hands while the country’s biggest housing developer took control of virtually all the Township’s land-use policy making. Pulte used COAH (the Council on Affordable Housing) to lord control over the Township — and Borkowski did nothing but cower and cry the sky was falling.

Shortly after Borkowski lost the next mayoral election, Clinton Township led 20 towns to sue COAH. Clinton Township quickly smashed the Pulte “damages” lawsuit that for 6 years Borkowski kept warning would cost taxpayers tens of millions of dollars. It turned out the claim was insupportable and merely an empty threat that Borkowski used to intimidate the public — and to fatten the wallets of his attorneys.

So many of Borkowski’s cops went afoul of the law that his police department was taken over by the County Prosecutor. (“Appeals court rules against Clinton ex-cops who falsified patrol reports,” Hunterdon Democrat.)

Borkowski’s director of Public Works and head of Recreation were fired or convicted for unlawful activities.

Every time voters rejected outlandish school budgets, Borkowski ignored them and voted YES to approve an unbelievable $11,211,307 in school tax increases during his tenure. He was terrified of “the school board lobby.” (Between 2006-2008, after Borkowski was gone, the Township council respected voters’ decisions and cut millions out of school budgets. Today those cuts are worth about $1,000 per year to the average homeowner forever.)

Fed up voters in Clinton Township booted Borkowski in 2005. In 2009 Borkowski’s backers backfired — and he lost the Republican 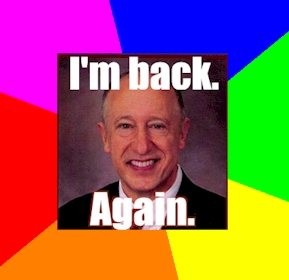 Now Tom Borkowski is back — on the June 4 Republican Primary ballot. And his public record once again precedes and dogs him.

Clinton Township couldn’t afford Tom Borkowski’s politics. Can Hunterdon County afford to give him control over tens of millions of taxpayer dollars, and the power to make deals and set policy?