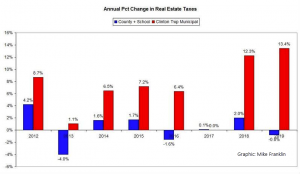 Clinton Township council members Amy Switlyk and Brian Mullay are running for third terms. Their 6 years in office are marked by financial disasters and hiding their bad decisions. They brush off public scrutiny, mischaracterize serious problems, and avoid the truth about soaring taxes.

In December 2017, after a secret council meeting (a “closed session”), Switlyk and Mullay approved a settlement agreement with affordable housing advocate Fair Share Housing Center (FSHC) to build over 800 new housing units in the township. Only a fraction are “affordable.” The rest are market-priced stand-alone houses, condos and apartments — a “bonus” for the developers who benefit from the re-zoning.

They allowed no public comment, held no hearing. There was no one in the audience when they voted “in public” to sign the deal — because no one was told they were going to do it.

They told residents that if they had comments, rather than speak up in the Clinton Township council chambers, objectors could drive to Somerville and tell it to a judge in court at a hearing. To participate, you had to file a formal objection with the court first.

Switlyk and Mullay didn’t reveal housing densities of 10 units per acre, or that 400 of them will be built on land that had been approved for only 21 units — next to a small neighborhood on a two-lane, unstriped country road near Foran Field.

Then they gave a donation of $30,000 of public funds to FSHC — the private advocacy group threatening to sue Clinton Township. They hid that, too, until a group of taxpayers found it.

Switlyk and Mullay approved suing Readington Township to confiscate its sewer capacity for Clinton Township’s affordable housing, without any public discussion. This was part of the FSHC settlement deal.

Even though the Clinton Township lawyers that wrote the settlement agreement also work for Readington, Readington was told nothing. Switlyk and Mullay kept mum. After being tipped off, Readington called the lawyers on the carpet because a lawyer cannot be on two sides of the same deal. They cannot represent both parties.

With the legal conflict of interest exposed, Switlyk, Mullay, the mayor and the rest of the council had to back off.

How to hide financial trouble

A town Clinton Township’s size should have about $1 million in surplus. At the May 24, 2017 budget hearing, the auditor said:

In other words, to avoid raising taxes and disclosing serious financial trouble to the public, Switlyk and Mullay voted to use almost all their surplus to balance the 2016 budget.

But it was much worse. Having depleted the surplus, Switlyk and Mullay approved sending a check to the school board for over $1 million, throwing the township into a $908,000 deficit.

While they tried to explain it away, the auditor stated that in his 11 years working on the township’s budgets, he had never seen a deficit. (See Annual Financial Statement for The Year 2017. p. 26.)

Switlyk, Mullay, the mayor and the council had to certify to the State that Clinton Township is a “Non-Qualifying Municipality,” the equivalent of getting audited by the IRS. (Hunterdon Review, May 26, 2017)

When difficult questions were raised by the public at the budget hearing, Switlyk said:

“How many topics are you going to bring up?”

He blamed “previous administrations” 13 years ago.

In December 2018 the school board sued the council for payment of school tax revenues. An expert “Municipal Finance Officer” certified that:

“the Township has created an endless cycle in which it has become dependent on the school district’s tax revenue to fund its own budget…The Township’s scheme [deferring school tax payments] is essentially like using one credit card to pay off another. It is not sustainable.”

Switlyk and Mullay have hidden 6 years of feeble government and questionable fiscal management, and covered up the costs.

Switlyk has fashioned herself as the advocate for parks and recreation, while she fumbles on the township’s big policy issues — including massive tax increases — and passes the ball with no comment.

Mullay serves as Council President and tries hard to cover up Mayor John Higgins’ shenanigans. He has stood by while Higgins spent untold sums on years’ of “negotations” with the Fair Share Housing Center — but never bothered to develop a strategy to fight off the unfunded mandate of affordable housing, which is not about the poor, but about enriching developers by giving them control over the township’s zoning.

Republicans who vote the party line should ask, can we afford 3 more years of these two “Republicans”?

Democrats should realize their votes count, but only if they vote.

Independents should be aware that in the expected light turnout at the November 5 election, their votes could turn the tide for Clinton Township.