Fake News: Amended settlement is a “win-win” with less “financial risk”! (NOT!) 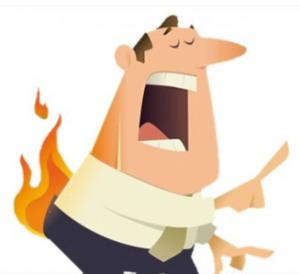 What should you believe? What the mayor said, or the legal agreement he signed?

Mayor John Higgins says the new amended affordable housing settlement agreement with Fair Share Housing Center (FSHC) is “a really good thing for the township” because by substituting the LeCompte property for Windy Acres “the financial risk in this instance is associated with CIS, not us.”

The trouble is, Higgins is not telling the truth.

“…the benefits to the township include the, ah, for instance at Windy Acres it’s our project so we would be on the hook for financing if really good financing is not obtained. Ah, the financial risk in this instance is associated with CIS, not us.”

The settlement agreement says that if there’s any problem delivering the housing on the LeCompte site, the financial risk falls on the Township. (And the planning board has already raised serious questions about the township’s choice of affordable housing developers.)

10.c. “In the event for any reason that the LeCompte development is not under construction for any reason within 48 months of the court’s approval of this Agreement at a fairness hearing, the municipality shall take all necessary steps to provide and demonstrate the provision of a realistic opportunity for the units identified for development on the site. The Township shall do this by funding the development using municipal funds…“

The agreement clearly creates a financial risk for the Township.

Considering that the Fair Housing Act does not require any such expenditure, why is Clinton Township — or any other town — agreeing to anything  of the kind?

“The one benefit of them [CIS], um, you know, sort of owning this project is that they will almost entirely fund the project, where as the mayor explained there is significant risk associated with the development of the Windy Acres site.”

Um, you know, sort of… they will almost entirely fund the project?

9. “…in the case where an application for outside funding is still pending, the municipality shall provide a stable alternative source, such as municipal bonding, in the event that the funding request is not approved.”

How is there no significant risk when the township has agreed to bond if a problem arises with getting outside funding for LeCompte? Taxpayers will pay untold amounts. The agreement has no limits.

“I think it’s a real gain for the township, um. When we have… we really like 100% affordable projects because they’re a nice compact footprint, they don’t come with so-called extra housing. But they do come with financial risk. So this, this takes that site out and, and really, the financial risk to us at this point, um, for 100% affordable, is limited to the 84-unit Marook– uh, development we plan to do on Marookian. So it’s, it’s a, it’s a really good thing for the township.”

The mayor calls the new deal “a real gain for the township” and he distinguishes between the financial risk posed by LeCompte and that posed by Marookian — but the mayor signed a contract that says “the parties recognize” that Marookian and LeCompte can trigger the same financial risks for the Township.

The mayor signed a deal that says in the event there’s a problem obtaining funding for either site, Clinton Township will “fund the difference.”

In whose version of reality is that “a really good thing for the township?”

When Readington hit the ceiling upon learning Higgins’ settlement deal included a commitment to sue that town “if needed” to seize its sewer capacity for Windy Acres, Higgins removed Windy Acres from the deal — and disingenuously cast himself as Readington’s hero.

“Yeah, and it, it eliminates friction with, uh, Readington, for instance, in terms of, you know, both of us going for, uh, sewer capacity within the same, uh, sewer district. So, I think it’s a real gain for the township.”

But the truth is:

Clinton Township can in no way “go for sewer capacity” in Readington’s sewer service district. That would be like your neighbor claiming he’s a nice guy because he isn’t going to “go for thee money” in your bank account after all!

Clinton Township is not a part of the Readington-Lebanon Sewer Authority and has no right to or access or claim on RLSA capacity. That is to say, the Windy Acres site was bogus from the start because it relied on confiscating another town’s assets.

After shamelessly delivering total and complete misinformation and fake news about the amended settlement agreement with Fair Share Housing Center, a resident’s public comments triggered self-congratulations all around at the February 7 council meeting.

“Sounds like a win-win-win! So I mean, a lot of wins for the township in the amended agreement then…!”

Real News: Clinton Township has been set up

Again and again and again the amended settlement agreement requires Clinton Township taxpayers to provide undefined, unlimited funding — including new bonding — to pay for these projects if anything goes wrong with this plan.

The deal is a set-up by Fair Share Housing Center — and the mayor and council walked into it like rubes or, perhaps, like politicians who have some other agenda.

The plan is designed to fail
Fair Share Housing Center has ensured that many of the affordable housing sites in this plan are included under “durational adjustments.” This means they are not presently compliant with affordable housing criteria. They lack some critical requirement like water, sewer, funding or permits or approvals.

The plan is designed to fail. 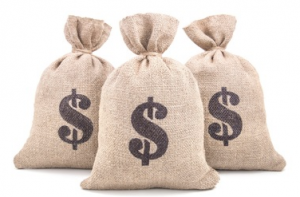 Taxpayers will pay
If those critical requirements are not met on schedule, FSHC will swoop down and require Clinton Township to pay with “municipal funds” — or “bonding.”

This agreement hands FSHC a whole series of blank checks signed by taxpayers.

Can the mayor and council guarantee the penalties and contingencies will never be invoked? Of course not.

For the same reason they agreed to sue Readington Township for sewer capacity. Fair Share Housing Center told them to.

FSHC controls township zoning
Worse, the penalties and contingencies give FSHC control over Clinton Township’s zoning for years to come.

The mayor and council have agreed in advance that undefined properties in town will be re-zoned “at a density equal to or exceeding 10 units per acre net density” until the terms of the agreement are satisfied.

It’s all in the “new, amended” settlement agreement

It’s all in the new deal that Mayor Higgins has completely misrepresented as “a really good thing for the township” with the silent backing of four council members. It’s all in the agreement the mayor signed. Read it. 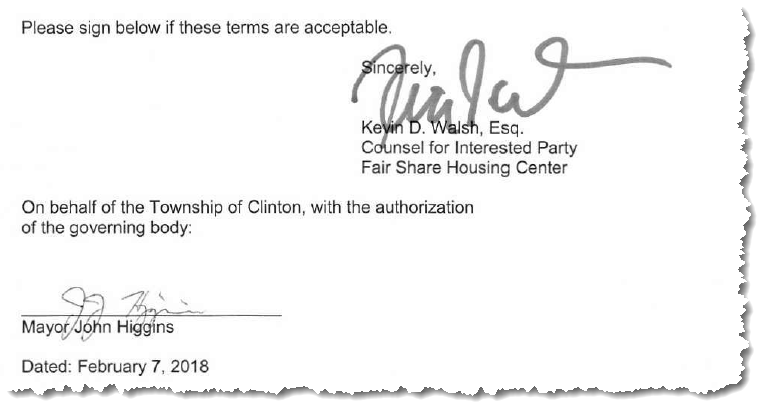 (All audio excerpts and quotes are from the official recording of the February 7, 2018 council meeting.)