A recent story in the Hunterdon County Democrat about Clinton Township’s old municipal building and the township’s affordable housing (COAH) planning is wrong. 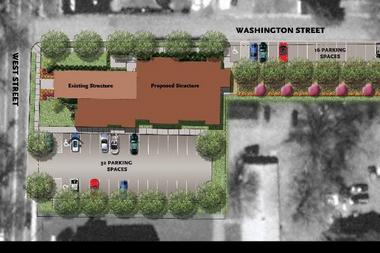 In 2008, many people invested a lot of time and energy to create the plan in the published photo that would have converted the old municipal building to senior apartments. Fast on the heels of getting rid of Clinton Township’s other white elephant — the Old Beaverbrook Homestead — we had the design completed, all approvals in hand and we had a developer on board ready to build it.

Contrary to the article, the State Historic Preservation Office (SHPO) gave its blessing to tear down all but the oldest part of the structure — the small, original Fox Seals store, which was to be converted to a community meeting area and offices for a newly-constructed affordable senior housing project. The story that it must now be completely rehabbed is inaccurate and misleading. SHPO never told us we had to keep the entire building. We included this project, with this design, in our COAH plan.

In 2010, Jim Imbriaco, Spencer Peck, and Peter Marra quickly killed our COAH plan and any hope of bringing the old municipal building project to fruition. For another four years, Annandale would have a dangerous eyesore as its village centerpiece.

Mismanagement long plagued the old municipal building. In 2003, then-Mayor Tom Borkowski and Councilwoman Antje Doyle spent $100,000 on a “plan” to bond $4 million to renovate the building as a museum. Helen Mataka and Rosemary Malaker led the fight against it. The idea of bonding $4 million for 1,400 square feet of space was ridiculous.

Since 2010, the township neglected the old municipal building and failed to construct any affordable housing, leaving it exposed to lawsuits like the one over Windy Acres that consumed Borkowski and Imbriaco for more than a decade. Will Imbriaco and Marra now try to resurrect the $4 million bond ordinance?

Mayor Kevin Cimei tried to proceed with our COAH and old municipal building plans in 2009 until Imbriaco, Marra and Peck out-voted him. Now someone at the township has a lot of explaining to do. How we went from approvals to denials in the last four years with absolutely nothing to show for it is completely astonishing. What the township did to its relations with the SHPO and this project is shameful. SHPO had no problem in 2008 with demolition of most of the building or with the plan in the photo published by the Democrat.

When Imbriaco, Marra and Peck took control in 2010, they submitted a new plan to COAH in fulfillment of their campaign promise to put all the township’s affordable housing on Windy Acres. We warned them that was impossible. With a court-ordered COAH deadline looming, it will be interesting to see who was right, and whether their promised “All Windy Acres” COAH plan is bogus.