Who could possibly suggest that taxpayers should be deprived of their right to vote on how much we are taxed?

In Clinton Township, the answer is: Your school board, which took away our 100-year-old right to vote on school taxes. (See Clinton Twp. board of education approves moving school election to November.) The board’s behavior reveals it wants no interference from the public.

In February 2016, board president Maria Grant didn’t want photos of protesting teachers in the newspaper, so she confiscated a news reporter’s photographs after trying to take her camera’s memory stick – and threatened to bar the reporter from the board meeting. To avoid scrutiny, Grant violated the First Amendment. (See Maybe Clinton Township school board needs civics lessons?)

“I have learned my lesson (at your expense) and shall certainly be more careful in the future. Indeed, in the future I will make clear that recording for use of the print media is no problem at all.”

Does Grant have more right than a Supreme Court Justice to violate the First Amendment?

Grant cited the board’s “policy” about cameras, but the reporter did not violate it. And who believes Grant has the power to confiscate private property? The board owes the public and the reporter an apology.

This isn’t the first time the board broke rules about transparency. A few years ago, the County Prosecutor found the board violated the NJ Open Public Meetings Act, citing it for repeatedly lying in official meeting minutes about its actions in meetings.

Does anyone see a pattern?

A few months ago, the Asbury Park school board voted unanimously to give voters back the right to vote on school budgets.

“One of the things we are determined to do is be more transparent and to work cohesively,” Board President Nicolle Harris said. “We decided to move the election from November to April to allow voters a chance to have a say on the school district’s budget… This change will allow more transparency. It is our goal to work together with the community and not to keep them in the dark on this, or any issues that affect the education of our children.”

When the Clinton Township Council recently asked questions about the school budget, the school board attacked the Council. The board makes it clear that transparency is not a priority. The board tries to keep us in the dark by interfering with the press, manipulating meeting minutes and accusing critics of hurting the schools. What is our school board afraid of? Voters? Taxpayers? The Council? Perhaps the board should visit Asbury Park to learn about transparency.

Fight Back! Demand your 100-year-old right to vote on taxes! 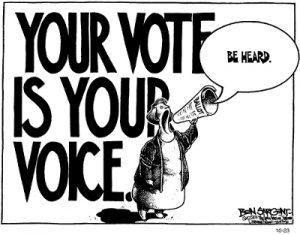 The Township Council can at any time give us back our right to vote on school taxes by a simple resolution — especially given the school board’s efforts to keep us in the dark.

Why would the Township Council hesitate?

Or course we want back our right to vote on taxes!

The Council can take action to reinstate our right to vote at the August 10 meeting. Don’t let them play politics!

You can also e-mail your Mayor & Council here.