Why should you care? The incumbent council (all GOP) has already:

If you’re a Republican, you will see only 2 choices for 2 Clinton Township Council seats — the incumbents. In other words, you have no choices.

If you’re a Democrat in Clinton Township, you will see no candidates on your Primary ballot for council. You have no choices.

In fact, in the November election incumbent Councilwoman Amy Switlyk is guaranteed 12 years on the council and incumbent Councilman Bill Glaser is guaranteed 3 more  years — without having to campaign, with no opponents, with no problem. These 2 don’t have to answer for their record, knock on your door, or answer your questions about how they’re spending your money. As shoe-ins, they’re not accountable to anyone.

This is where corrupt local government starts. Representative government is an illusion. Your vote does not count in the council election.

The Clinton Township Democratic Committee, which is elected every two years by registered Democrats, is responsible for putting Dem candidates on the Primary ballot. They choose the candidates. (Most people have no idea what their party Committee is or what it does.)

But the local Democratic Committee didn’t nominate anyone for the ballot — so, there will be no Democratic choice on the November ballot for township council seats.

This is the Democratic Committee’s #1 job. What are they doing? They’re guaranteeing that Republicans will keep running Clinton Township.

Why are there no Democrats on the ballot?

Each township voting district has 2 Democratic Committee members. Voters in each district elect them every 2 years. Look up your Committee member here (scroll to page 6 to find your voting district. Their names and addresses are public information.) Or, contact Vicki Fresolone and Kira Lawrence — they chair the Committee responsible for giving you candidates to vote for. Ask them why they’re not doing the job they were elected to do — put Democratic candidates on the ballot!

This is where corrupt politics start, because council incumbents are “elected for life.” They can do whatever they want without fear of ever losing their seats.

Local party Committees are the lowest elected positions in every town. When they don’t do their job, voters suffer. Worse, without candidates on the Democratic ballot in June, the Dems fail to build a “bench” for higher level office.

In case you’re wondering why there have been no Dem freeholders in Hunterdon, it’s because the local Dem Committees in Hunterdon have no “bench.”

In case you’re wondering why you don’t have anyone to vote for in the Democratic Primary in June, it’s because your voting district’s Democratic Committee member (you elected them!) didn’t do their job — and don’t seem to care. 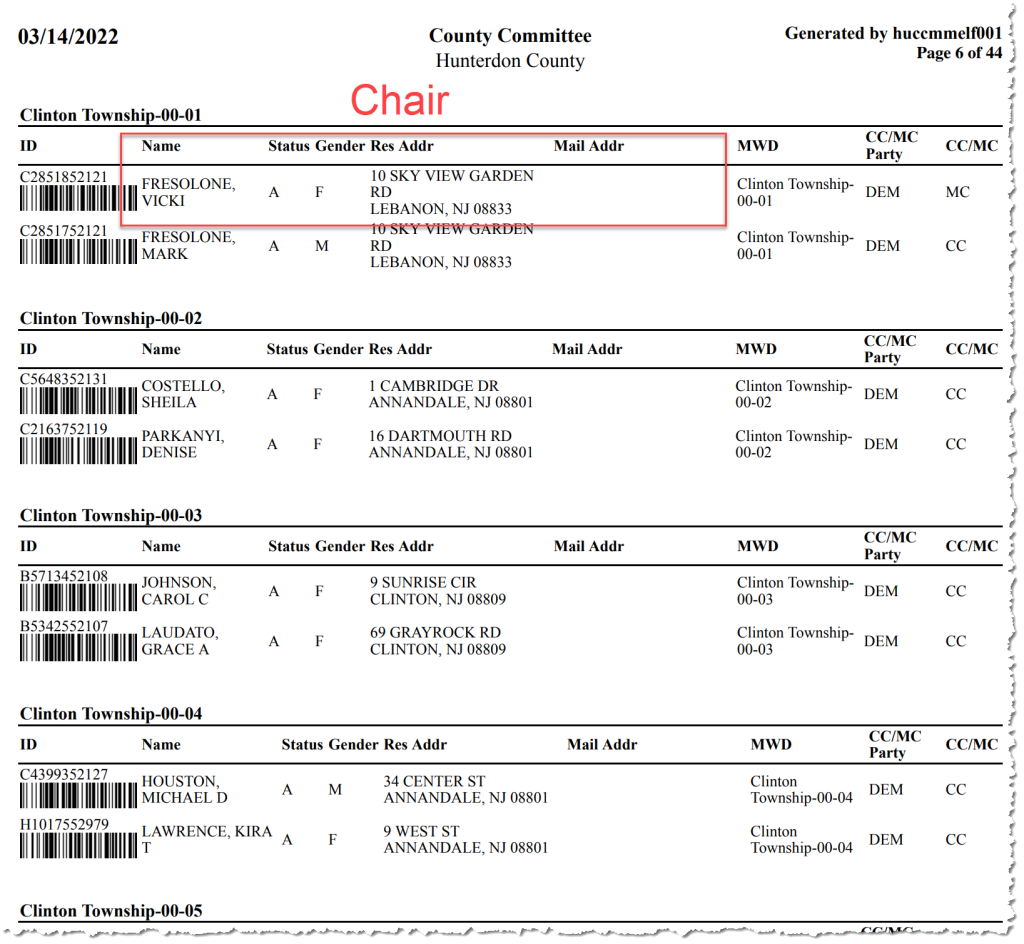