In the upcoming Primary Election (June 8), and even in the November election, you might as well not vote. That’s a shocking suggestion. But it’s apt.

Because your vote doesn’t matter. The Republican party and the Democratic party have seen to that. What’s wrong with Clinton Township is Republicans and Democrats. 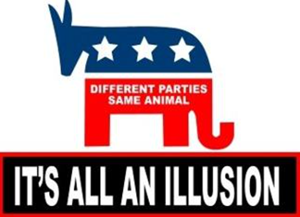 The Republicans are letting you vote to re-elect 3 incumbents, whether you like them or not. The GOP gives you no choices in their Primary. Only the incumbents are on the ballot — Tom Kochanowski, Marc Strauss and Bill Glaser. They’ve already “won” the Primary for lack of competition. So your vote literally doesn’t matter.

But wait — you’re a Republican and you’re not happy about hundreds of affordable housing units being built in the township? Blame it on Kochanowski, Strauss and Glaser. They just voted to approved yet another affordable housing deal in a “special” 7-minute meeting with no public present. In one secret deal after another this council keeps approving ultra-high density units — soon in your own backyard.

In the upcoming elections you have no choice but Kochanowski, Strauss and Glaser.

By the way: Kochanowski and Glaser got onto the council without an election. Nobody voted for them. They were appointed. (These shenanigans go back years. See Clinton Township Republicans play hardball.) More about this below.

No competition so you can’t “Vote the bums out!”

In America, the strength of our government lies in competition. That’s how voters get to choose between ideas, plans, agendas and promises. It’s also how we “Vote the bums out!” in order to ensure we get people in office that represent us.

But the Democrats are running no candidates at all for council. The 3 Republican incumbents are guaranteed re-election in November. The incumbent all-GOP council has no competition in the November election. The Dems have seen to that.

You voted for cannabis to be legal in Clinton Township? (Over 60% of you did.) Well, the GOP mayor and council just banned any and all cannabis businesses from the township — and relinquished cannabis tax revenues to other towns. You can blame the Democrats that you can’t vote the bums out in November.

Oh, you could write a candidate in as a protest vote, but you’d be pissing up a rope. Not only doesn’t your vote matter in Clinton Township; nobody’s listening.

Clinton Township is run by a Supreme Soviet, a government of politicians, by politicians and for politicians.

When elections are uncontested, the incumbent candidates don’t bother to campaign. They won’t knock on your door or otherwise ask your opinions, or about what’s most important to you, or what problems in the township you want to see addressed. They don’t have to. They don’t care. They are guaranteed their seats and their power.

You’re not happy about lack of leaf pickup every fall? (Or winter, since that’s when they get around to picking up leaves.) Blame your Supreme Soviet, then go pound sand. You can’t vote the bums out. You don’t have any choice because there’s no competition.

There are no politics in Clinton Township

For the first time in years, 3 council seats are in play. (Normally it’s just 2.) That means a majority of the council, which means whatever 3 candidates win, they will have control of the council.

You’d think the Democratic party would be all over this election. But they haven’t put up even one Democratic candidate on the Primary ballot. 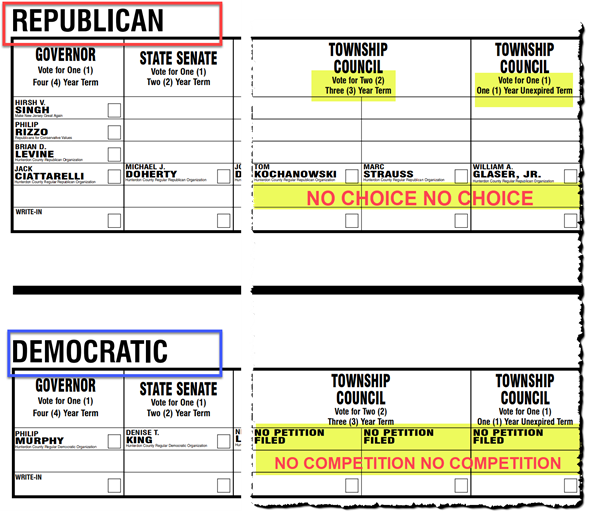 No Democrat has been elected to the township council in over 30 years.

Republicans might see this as cause to cheer. In fact, former Hunterdon County Republican Committee Chairman Henry Kuhl used to say:

“We don’t care whether they’re doing a good job. Our job is to make sure Republicans keep getting re-elected!”

This is why there are no politics in Clinton Township — just politicians serving a select few friends and special interests that keep them in office.

There are only politicians in Clinton Township

So, if you’re a Republican and you have issues or problems with anything your government has done, blame it on the GOP, which keeps new blood, new ideas, and fresh thinking off your council.

If you’re a Democrat unhappy with your mayor and council, blame it on the Democratic party, which cannot be bothered cultivating and developing candidates for local office. They’re too busy asking you to attend rallies and to make donations to state and federal level elected seats.

You think Comcast rates are too high? Blame your GOP council. They control Comcast’s franchise deal with Clinton Township — and they let Comcast get away with information-highway robbery. And residents keep paying. Where does all that money go?

The Republican party gives you more of the same, year in and year out.

The Republican and Democratic parties are what’s wrong with Clinton Township.

2 of 5 council members didn’t even get elected

You’re mad your taxes keep going up (+5% this year alone) while services are being cut? You’re mad you can’t reach the township CFO or Administrator because they work only 3 days a week? Don’t worry — your taxes are still paying them the highest salaries ever given to any township employee.

No choice and no competition is just a part of the problem.

2 of the 5 council members were not even elected when they got onto the council. Under a questionable New Jersey law, councilmen Tom Kochanowski and Bill Glaser were  appointed by the Republican party (2017 and 2021), not elected by voters. As incumbents, they’re guaranteed re-election because voters have no choices because there is no competition.

And that’s also how council members stay in office for a decade or more.

How many uncontested, guaranteed years in office does any politician deserve?

Councilwoman Amy Switlyk is coming up on her ninth year in office. Brian Mullay has served in office as long, as a councilman and as mayor — and he’s in for at least 2 more years. When he was elected mayor in 2020 voters had no choice; there was no competition from the Democrats.

Over the past few years, your council:

Mullay, Switlyk, Kochanowski, Strauss, Glaser — all get re-elected without competition to speak of, year after year — going on a decade for some of them. They know they can do anything they want.

This entry was posted in Affordable Housing, Election 2021, Municipal and tagged Clinton Township. Bookmark the permalink.