Tired taxpayer’s voice: When is the Clinton Township budget due?

Another tired taxpayer: Who knows?

ExMayor: Mr. Scott, what is the deadline for a Hunterdon school to deliver its budget to you?

Scott: I hope schools will deliver their budgets no later than March 30. But the following Monday would be fine.

ExMayor: But what is the statutory deadline by which it must be submitted?

Scott: Under the new rules with November elections, there actually isn’t a deadline. The rules are new and because there is no election in April, a district can take more time, but I hope they get them in by March 30.

ExMayor: But there must be a deadline. Are you saying a district could submit its budget in May or June or later?

Scott: Under the new rules, a school could submit in April or May or later. The only practical limit is when the county tax department needs to produce tax bills. The tax assessor would need it.

ExMayor: So if our board of education needs more time, it does not have to submit its budget on March 30, or even April 2 — they can take as long as they need?

Scott: It wouldn’t be good for me if they delay. I hope they get it in on time but under the new rules they can take all the time they need.

Board president Jim Dincuff asks business administrator Anthony Del Sordi when the budget is due. Del Sordi does not answer the question. Instead, he circumvents it by stating the deadline for the public hearing.

DINCUFF: “So, we will be submitting a budget to the county superintendent of schools, uh, that is due at what date?”

DEL SORDI: “The last date is, uh, for the public hearing is March 30th.”

Same event, board president Jim Dincuff and board member Mark Kaplan, discussing dates in mid-April for next board meeting to for further review and discussion of school budget.

A complaint has been made to county superintendent of schools Jeffrey Scott that Scott has ordered CTSD to submit its budget no later than March 29, 2012, even though the CTSD board of education voted not to approve its budget until after spring break in April.

I hope this clarifies the situation for you.

Now answer the following questions, and decide who should wear the dunce caps!

1. In Scene II, why did CTSD business administrator Anthony Del Sordi not answer board president Jim Dincuff’s question about when the budget is actually due? (Hint: Did you even notice Del Sordi did not answer the question? Listen again!)

2. In Scene II, why did Del Sordi only state the deadline for the public hearing? Extra Credit: Do you think Del Sordi intentionally avoided the question? Explain why.

3. In Scene III, why did Del Sordi not question the speaker’s statements that county superintendent Jeffrey Scott said there is no budget deadline? (Hint: Del Sordi is a certified school business administrator. Part of his job is to produce the school budget and follow all the rules so it’s submitted on time!)

4. In Scene IV, while Dincuff and Kaplan are discussing dates for next budget meeting in mid-April, why didn’t Del Sordi stop them and warn that there is a deadline to deliver the budget to the county superintendent — and that they cannot still be working on the budget in April, since it is due in March? (Hint: Del Sordi has now had 56 minutes to tell the board what the deadline is to submit the budget. Remember: Del Sordi is still a certified school business administrator.) Extra Credit: Do you think Scott already led Del Sordi to believe there was no deadline?

5. In Scene VI, how many times does county superintendent Jeffrey Scott contradict what he said in Scene I?

HINT: Use all information at  your disposal, including two e-mails Scott exchanged with ExMayor.com: 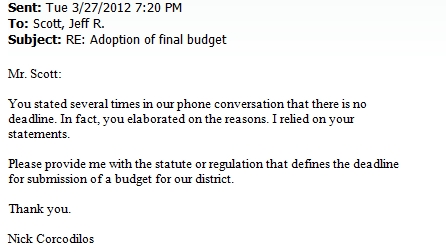 Compare Scott’s response below to the telephone log above, in Scene I, which reveals that Scott lied:

6. In Scene VI, why does Scott state that he has “been advised by the Department of Education?” (Hint: Scott IS the Department of Education! Most people think the “county” superintendent works for the county, but, Surprise! he actually is the DOE’s local representative and authority on DOE policies and schedules! He’s who business administrators like Del Sordi work closely with on school budgets!)

7. BONUS QUESTION: In Scene I, why does certified business administrator Del Sordi say, “The last date is, uh, for the public hearing is March 30th,” while in Scene VI county superintendent  Jeffrey Scott says, “…the last date for a district to hold a public hearing is March 29“?? Extra Credit: Which of the two certified officials is correct? Trick Questions: Which one should the CTSD BOE believe? Which should members of the public believe? Why does the Department of Education permit mulitiple stories about a deadline? Silly Question: Why do we even have a county suprintendent?

8. Group Project: Contact the office of New Jersey Governor Chris Christie at 609 292-6000. Speak with any staff member. Work together to figure out why the State Deparment of Education would deny a local board of education the time it needs to properly review and complete its annual budget. BONUS: Extra points if you can come up with reasons why the CTSD board of education hasn’t been able to complete its budget in the time allowed.

Talk to the actors in the above drama. Are they surprised that citizens actually pay attention to the details of these scenes in the life of the board of education and the New Jersey Department of Education? Do they think no one picks up on the errors, mis-statements, misrepresentations, and inconsistencies found in the drama?

Write an essay about the quality of education management in the State of New Jersey, and include three reasons why the cost per pupil and your school taxes continue to go up ,while your income and property values continue to go down.