3 school board members who stood up — and 1 who fought

The recent heist of almost $250,000 in property tax relief by a handful of Clinton Township “school board officials” was hidden from the public. But it didn’t happen unnoticed.

While the “board leadership” ran out the clock and prevented the board from meeting to vote on applying the funds for immediate tax relief, three board members stood up to do the right thing.

Board member Marc Freda sounded the alarm early on July 14, right after the announcement of the funding. In an e-mail to board secretary Patricia Leonhardt, Freda insisted that the funds be applied immediately for tax relief. He also asked whether the board was consulted about having a meeting to discuss and decide the matter. 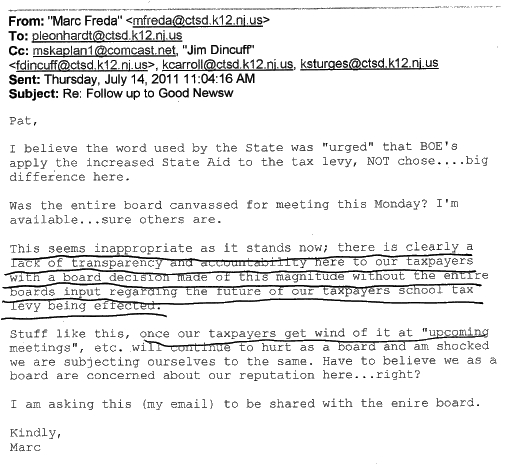 Board member Kevin Sturges requested a different meeting — he wanted a committee to meet to discuss the funding, so it could advise the full board:

Board member Michelle Sullivan noted that the BOE had made a pledge, possibly referring to a school budget campaign promise made by superintendent Kevin Carroll that, “As promised, any additional revenue would go back to the taxpayers!” Sullivan cautioned that keeping the unexpected state aid “will backfire on us and will undermine our ability to put forth a credible budget next year.”

These concerns and requests fell on deaf ears. The “district leadership” — Dincuff, Kaplan, Leonhardt, and Carroll — had already decided what to do, as indicated on an e-mail from Leonhardt written July 14 at 10:28 am:

This was over five days before the deadline to take action. Contrary to misinformation published by the Hunterdon Democrat on August 18, that “there was too little time to publish advance notice of the meeting,” the BOE could have held a public meeting so that all members could contribute to the decision — as some had requested.

BOE member Grace Hoefig didn’t think it was “that complicated” — “I see no reason for any meeting, resolution or announcement.” She wanted the freedom to “spend on resources the district needs.”

Who needs the public watching over what the BOE does with a windfall of funds that the governor issued specifically for tax relief — when the BOE could tuck the money away? How did Leonhardt put it? “What to do with more money is always a good problem to have…” as long as no one is free to watch at a public meeting.

But records clearly show it was Freda who stood out as the conscience of the board, who stood up repeatedly and fought for taxpayers and tax relief, and who again and again demanded action to return the monies to taxpayers immediately.

Records also show that it was Kaplan who repeatedly argued with Freda. In a July 14 e-mail, Kaplan wrote to Freda:

“If the state wanted to directly give it back to taxpayers, they would have to send them checks, but we (the district) can’t do that.”

Freda’s point was that the district could “give it back to taxpayers” easily by voting to immediately apply the funds to lower the current tax levy.

In this e-mail, Freda challenges Kaplan and brings a sharp focus on the real problem at the board of education: Lousy governance. Freda defends the most precious tenet of representative government: A vote. “The decision to hold such a meeting should be made with full board consensus…period! You know that.”

Clearly, Kaplan does not know that, or doesn’t care, because he and a minority of four out of nine “decided” to keep $247,310 from taxpayers. 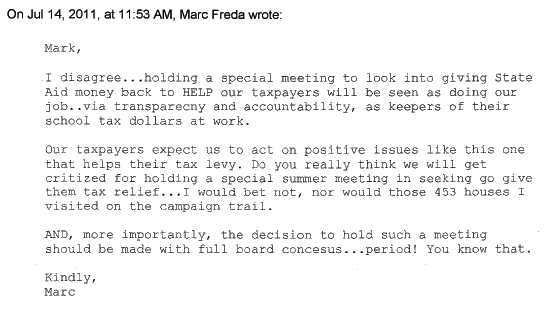 Freda’s exortations fell on deaf ears. The Gang of 4 — Dincuff, Kaplan, Leonhardt, and Carroll — rejected requests to hold a full BOE meeting in public where every board member’s vote would have been registered.

The result of lousy governance on the Clinton Township BOE — the result of holding no meeting to vote and listen to comments of the public — is higher tax bills when they could have been lower by almost a quarter-million dollars this year. You can thank a Gang of 4 on your local school board.

Now you know who stood up for the residents, voters, and taxpayers of Clinton Township.