Spencer Peck for Council: How stupid can we get?

Spencer Peck is still running for Clinton Township Council. Below is an e-mail he sent out today in support of his campaign. It includes a “forward” of a spam e-mail, which Peck uses to demonstrate his political position on various matters.

Peck claims the information in the spam e-mail has been authenticated by Snopes.com, the website known for investigating urban and online myths. He also claims the data presented are from “Professor Joseph Olson.”

Snopes.com reports the information is “mostly false.” Olson vehemently disclaims and denies the data and quotes attributed to him. In fact, Olson says, “It is entirely BOGUS as to my authorship. I’ve been trying to kill it since December 2000.”

Spencer Peck, the man running for Council, relies on spam e-mail, bogus claims and false data to convince you of “his point.” No one seems to know what this Village Idiot’s point really is, except that he wants to represent you on the Council.

If you’ve been paying attention, you know that this is just another example of Peck’s fantasy facts which he’s used to whip Township residents into a frenzy again and again. How many “agains” will this town tolerate?

Spam for Council. How stupid can we get?

From: Spencer Peck <spencerpeck@comcast.net>
Sent: Mon, November 2, 2009 9:44:29 AM
Subject: Be Sure to Vote Tomorrow
Clinton Twp Voters
This is to thank all those township voters who supported me for town council in the June primary. With just a few hours to go, the New Jersey Governor’s race has real national significance. As Governor Corzine asked us to “hold him accountable” and, as he is a clear surrogate for President Obama and his policies; we have a very clear choice. That choice is to vote the entire Republican line. This will send a message that we treasure our values, our way of life, our nation and its Constitution and oppose those who daily assault our Rights & Liberties.
Your vote is important on Tuesday. For your families, for your children, for your futures, for your nation; exercise your right to vote.  Thank you in advance for your continued support.
Sincerely,
Spencer Peck
Clinton Township
PS: The message below is authentic via snopes.
Also, President Obama signed a bill on Friday removing the restriction on immigrants with aids. This via WOR radio and the Saturday Star-Ledger.
Begin forwarded message:
YOUR CHOICE – MAKE A GOOD ONE – VOTE
OBITUARY

It does not hurt to read this several times. 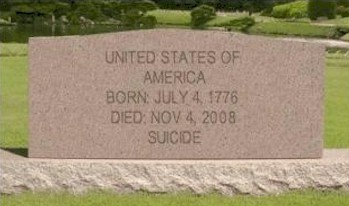 Professor Olson adds: “In aggregate, the map of the territory Republicans won was mostly the land owned by the taxpaying citizens of the country.

Olson believes the United States is now somewhere between the “complacency and apathy” phase of Professor Tyler’s definition of democracy, with some forty percent of the nation’s population already having reached the “governmental dependency” phase.

If Congress grants amnesty and citizenship to twenty million criminal invaders called illegals and they vote, then we can say goodbye to the USA in fewer than five years.

If you are in favor of this, then by all means, delete this message.

If you are not, then pass this along to help everyone realize just how much is at stake, knowing that apathy is the greatest danger to our freedom.

This entry was posted in Election 2009. Bookmark the permalink.