It’s election time in Clinton Township. We expect to hear lofty promises and claims from candidates. Some of these statements are supported with facts; some of them are bull dinky. Don’t believe everything you hear. Look for evidence. Look at the record.

“Having spent more than 15 years on the Clinton Township Planning Board, 12 as its chair, I can speak with authority and experience about land use matters and planning in our community.”

The most lofty of James Imbriaco’s claims is this quote from a newspaper editorial that he cites on his campaign web site.

“I would like to close with a brief quote from an editorial about myself that was published on January 18, 2007 in the Hunterdon democrat. It reads as follows: ‘the Clinton township of today looks much as it did when Mr. Imbriaco took the reigns of planning. Under proper stewardship, it should retain that character for many years to come. For that, for showing how government is supposed to work and for leading by example, we all owe him a great debt.'”

[The word reigns is an interesting slip by an effusive Democrat editor. The correct word is reins. Unless we’re talking about a king.]

The editorial was published in the Democrat soon after Imbriaco was relieved of his planning board chairmanship. The editorial confers a kind of sainthood on James Imbriaco.

But the Hunterdon Democrat knows better. Since Clinton Township was founded in 1841, 25% of its residential growth occured during the 10 years James Imbriaco chaired the planning board. That’s about 1,100 residential units in just 10 years, in a town that has only about 4,400 residences in total.

Here is Clinton Township on April 15, 1995 — the villiage of Annandale — two years before James Imbriaco became planning board chairman. At the lower left is Miller’s Tavern. Behind Miller’s and in the middle of the photo is the Annandale Pumpkin Patch. 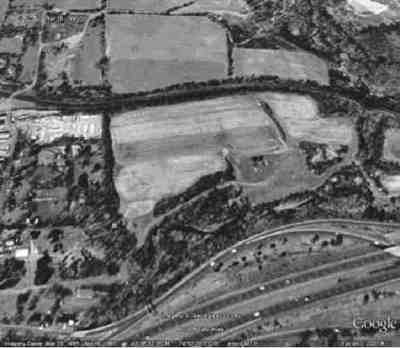 Here is what the Annandale Pumpkin Patch looked like a few years after James Imbriaco became chairman of the planning board. He was in charge of Clinton Township land use policy and the review and approval of development applications. He voted to approve these 222 housing units — The Mews — on December 1, 1997. 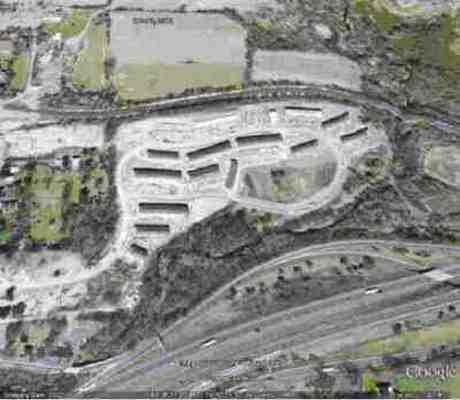 What you see above is the construction phase of The Mews, proposed and built by Charles Kushner, later convicted and put in prison by U.S. Attorney Chris Christie. 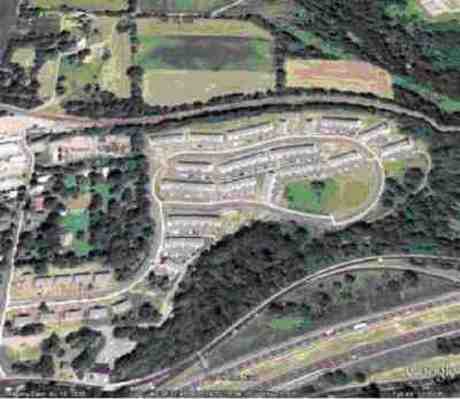 A funny thing happened on the way to sainthood. Sprawl. 222 housing units in the middle of the quiet little village of Annandale.

Then another funny thing happend.

Through the end of the 20th century, this stunning promontory of unspoiled Clinton Township farmland jutted into the pristeen waters of Spruce Run Reservoir: 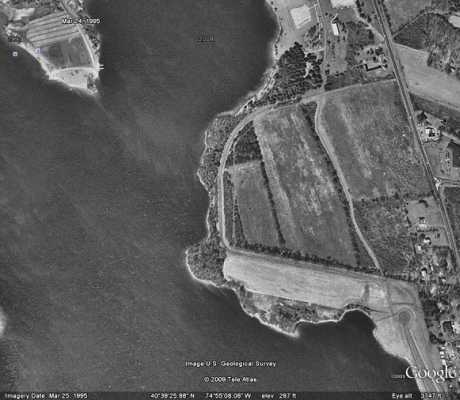 But on a summer Monday evening, July 9, 1999, James Imbriaco led the planning board to approve Water’s Edge — a development of 100 houses to be built right on Spruce Run Reservoir. 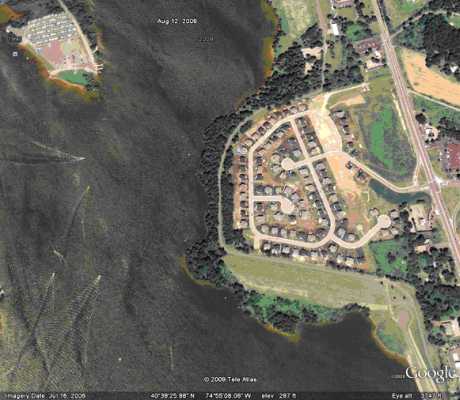 “…for showing how government is supposed to work
and for leading by example, we all owe him a great debt.”

During over a decade on the planning board, James Imbriaco had the opportunity to implement ordinances and polices to protect Clinton Township. But when Annandale residents sought help to stop The Mews in 1997, all they found was ordinances and policies that permitted projects like The Mews.

To these frustrated Annandale residents, James Imbriaco offered a refrain that he would repeat again and again during his chairmanship over the next 10 years:

“We can’t prevent this project because the ordinances authorize it,” board Chairman James Imbriaco said. “We can improve it. That’s the kind of say you have.”

“That sounds like damage control to me,” said Robin Lamo of East Street. She moved from East Brunswick eight years ago to escape the rampant development there.

Seven years later, with plenty of “authority and experience” under his belt, on March 15, 2004 planning board chairman James Imbriaco voted for and approved a new Clinton Township Affordable Housing Plan (see p. 9) — which would put another 90 housing units in the village of Annandale, 50 of them on the Beaverbrook Homestead on Beaver Avenue.

The next year, in 2005, James Imbriaco would once again tell another group of Clinton Township residents that the only choice is to “do what we need to do” — to capitulate to yet another legal threat and sign yet another settlement agreement with yet another developer to build even more housing units in Clinton Township, this time on Windy Acres.

James Imbriaco told the Council to approve a one-sided settlement agreement with Pulte Homes for a development more than twice the size of The Mews:

But when he demanded that the Township conceded to Pulte Homes, James Imbriaco went too far. Clinton Township was no longer buying it. This was the beginning of the end of Municipal Planning by Concession and Excuses.

A rag-tag group of citizens with no legal experience and little knowledge of land use policy got together to stop the wholesale selling-out of Clinton Township.

They organized quickly and learned the ropes even faster. In a fraction of the time that James Imbriaco held the power and authority to protect Clinton Township from greedy developers, this group radically changed Township policy.

They led voters to elect two strong mayors in succession — and new Council members who quickly turned Clinton Township around. They fought back against Pulte. Reversing a key failure of the previous administration, they gained important support from County and State officials and State legislators. They re-wrote the township’s sewer policy. They denied developers influence over the township’s affordable housing plans …And they stopped the 90 new units that James Imbriaco approved in the heart of  the village of Annandale, just a stone’s throw from The Mews. They hired new attorneys, new engineers and new planners. They appointed virtually an entirely new planning board.

10 years of unbridled sprawl under James Imbriaco stopped dead in its tracks.

In over a decade of “leading” the Township’s municipal planning, James Imbriaco “served” by appeasing developers and their lawyers, and by offering excuses and half-hearted apologies for his failure to protect Clinton Township from high-density residential over-development.

Almost 25% of Clinton Township’s residential development since 1841 occurred during the 10 years James Imbriaco chaired the planning board — almost 1,100 housing units. Those units increased the population of school children in Clinton Township by hundreds — and led to the financing of an entire new school at a cost to taxpayers of $40 million. That’s where our high taxes come from: uncontrolled sprawl.

In an April 30, 2009 letter to the editor in the Hunterdon Democrat, council candidate James Imbriaco says:

“Having spent more than 15 years on the Clinton Township Planning Board, 12 [sic] as its chair, I can speak with authority and experience about land use matters and planning in our community.”

A funny thing happened on the way to sainthood. James Imbriaco became the father of sprawl, higher taxes and “policy-making by appeasement” in Clinton Township.

James Imbriaco says he wants to bring “nearly 30 years” of his legal expertise to the Council to help the Township. During over a decade, that same legal expertise:

— while a group of activist citizens with no legal expertise was able to stop COAH and stop the biggest residential developer in the United States from building Windy Acres.

James Imbriaco’s legacy is on the record: appeasement, sprawl and higher taxes.

This entry was posted in Election 2009. Bookmark the permalink.